The Elf on the Shelf has become a favorite holiday time tradition at our house within the last few years. I start our Elf on the Shelf Planning early to avoid any additional stress later in the season.

I remember the Elf showing up about mid December the first year we had him and moving around a few times before he returned to the North Pole with Santa on Christmas Eve.  Our kids loved the Elf immediately. They would jump out of bed excited and energized each morning and ready to find their Elf.

I was quickly convinced that this Elf was a keeper. I still was not convinced he needed to spend a month with us. Christmas is a busy time of year.  I couldn’t imagine adding one more thing to our to do list!

The next year our oldest returned from Thanksgiving break to find a class Elf. This lead to a lot of stress about when his Elf was showing up. Needless to say, our Elf shows up promptly on the Monday following Thanksgiving every year.

We have a good time with our Elf, John Fletcher. John Fletcher gets into his fair share of mischief at our house. The kids wake up every morning excited and anxious to see what John Fletcher has been up to while they were sleeping.We have a lot of fun with John Fletcher, but there’s a lot days from Thanksgiving until Christmas.

We always start out with gusto and then quickly run out of steam. I have found that planning our ideas out of ahead helps tremendously. It alleviates the last minute stress of trying to figure out what the Elf is going to do when all you want to do is fall into bed.

Elf on the Shelf Planning Calendar

I’ve created a calendar this year to keep us organized and diligent with our Elf duties. We won’t be stumbling around trying to come up with a quick excuse as to why the Elf didn’t move. We have every day planned out from the Monday after Thanksgiving until he leaves on Christmas Eve with Santa. Plus I have linked an idea or two or more to go with each day.

I’m also including a blank calendar if you would prefer to plan out your own Elf activities. 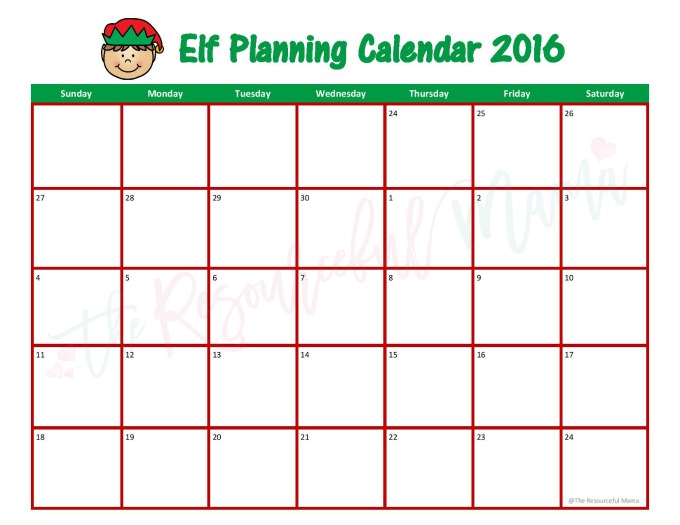 Elf on the Shelf Ideas

This ideas will help you turn your basic ideas on the planning calendar into reality. (Click on the highlighted words for more information.)

Elf in the pantry

Elf gets into stickers

Elf watches a movie or plays a video game

Elf is mischevious in the Christmas tree

Elf in the refrigerator

Elf in the bathroom

Elf adds to your pictures: a lot of Elf in the frames, draws on the pictures

Elf gets into tape or bows: trying on hairbows, hangs bows & ribbon from the ceiling


Just in case you forget a night: 15 Reasons Your Elf Did not Move

The images, tutorials, and content on theresourcefulmama.com are protected by copyright laws. Please read our policy before using any of our images.

Get the latest straight to your inbox!