We have some huge Pokemon fans at our house. Every day at school pick up, I hear, “did you bring your phone so I can catch Pokemon”. Our oldest has been obsessed with Pokemon for almost a year and the release of Pokemon Go multiplied his obsession with it. His of love of Pokemon has trickled down to the younger two, so we decided to surprise the kids with Pokemon pumpkins for Halloween. 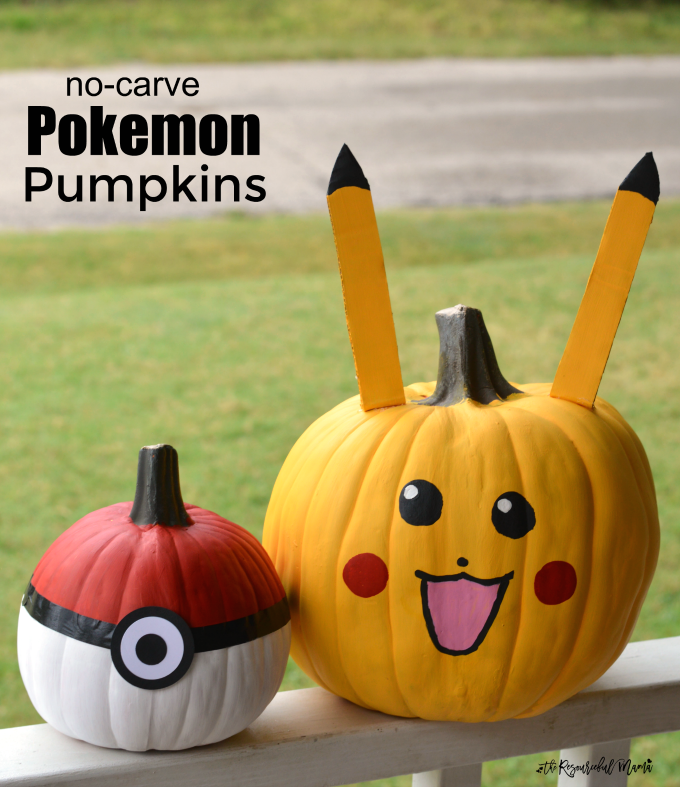 We made a Poke Ball and Pikachu. These make a great no-carve pumpkin option for Halloween.

When we started making these pumpkins, there was no real pumpkins for sale yet, so we used faux pumpkins.

1.We started by painting the pumpkin yellow. We added three coats of yellow paint until we got the coverage we desired.

2. We used a round sponge paint brush (similar to this  one) to paint the eyes black. We then got fancy and used a q-tip to paint white circles on the black eyes. Most of the pictures we looked at of Pikachu show the white part of the eyes near the top left, so that is where we placed the white paint.

3. We used another q-tip to paint a black dot for the nose.

5. We used the round sponge brushes again to paint the red dots for Pikachu’s cheeks.

6. For the ears, we cut 2 long skinny pieces from cardboard. Cut one end of both pieces to make a point. Paint the pieces of cardboard yellow and the pointed ends black. Once dry, attach to the top of the pumpkin by making a small fold in the non-pointed end. Use a glue gun (or other strong glue) and glue the small folded pieces to the pumpkin.

1. We started by painting the top half of the smaller pumpkin red and the bottom half white. We did three coats of paint on this pumpkin as well to get the desired coverage.

2. We used black tape to make the center black ring around the pumpkin. You could also use black paint to this ring.

The images, tutorials, and content on theresourcefulmama.com are protected by copyright laws. Please read our policy before using any of our images.

Get the latest straight to your inbox!